The second half of January is gone, and it is undoubtely clear that this month has been characterized by hacktivism and will be remembered for the Mega Upload shutdown. Its direct and indirect aftermaths led to an unprecedented wave of cyber attacks in terms of LOIC-Based DDoS (with a brand new self service approach we will need to get used to), defacements and more hacking initiatives against several Governments and the EU Parliament, all perpetrated under the common umbrella of the opposition to SOPA, PIPA and ACTA. These attacks overshadowed another important Cyber Event: the Middle East Cyberwar (which for the sake of clarity deserved a dedicated series of posts, here Part I and Part II) and several other major breaches (above all Dreamhost and New York State Electric & Gas and Rochester Gas & Electric).

Chronicles also reports a cyber attack to railways, several cyber attacks to universities, a preferred target, and also of a bank robbery in South Africa which allowed the attackers to steal $6.7 million.

Do you think that cyber attacks in this month crossed the line and the Cyber Chessboard will not be the same anymore? It may be, meanwhile do not forget to follow @paulsparrows to get the latest timelines and feel free to support and improve my work with suggeastions and other meaningful events I eventually forgot to mention.

END_OF_DOCUMENT_TOKEN_TO_BE_REPLACED

It is time for the second part of the March 2012 Cyber Attacks Timeline, a month that will probably be remembered for the breach occurred to Global Payments, a credit card processor, whose aftermath may potentially affect up to 10 million credit card holders belonging, among the others, to Visa and MasterCard.

On the hacktivism front, not even three weeks after the arrest of several LulzSec members, a new hacking crew has appeared whose name, LulzSecReborn, clearly reminds the infamous collective and its Days of Lulz. They entered the scene with a noticeable, albeit discussed, leak: more than 170.000 records from a military dating site.

Other remarkable hacktivism-led cyber attacks include the so called #OpFariseo, a wave of Cyber Attacks targeting websites related to the visit of the Pope in Mexico, and a new cyber attack to PBS. It is also important to notice the debut of the Anonymous in China, a debut characterized by a massive wave of defacements.

Last but not least, among the events of this month there is one which in particular deserves a mention, and is the leak which targeted Vector Inc., a Japanese computer selling firm, potentially affecting more than 260,000 users.

As usual after the jump you will find all the references.

If you want to have an idea of how fragile our data are inside the cyberspace, have a look at the timelines of the main Cyber Attacks in 2011 and 2012 (regularly updated), and follow @pausparrows on Twitter for the latest updates.

END_OF_DOCUMENT_TOKEN_TO_BE_REPLACED

Although the number of attacks has considerably diminuished, the first half of July has left several high-profile attacks which deserverd huge attention, exposing in theory more than 2,000,000 individuals. Yahoo! Voice, Android Forums, Nvidia, Formspring, Billabong and ASUS are several of the well-known names that were victims of the high-profile breaches in the first two weeks of July.

Besides these remarkable events, it looks like the actions carried on by the Law Enforcement agencies in the last period led to some results since the number of incidents looks undoubtably smaller than the previous months.

For what concerns the cyber attacks driven by hacktivism, it is particularly important to notice #OpPedoChat, still ongoing, which caused many pedophiles to be exposed, in several cases with unpredictable consequences, as in Belgium where a far-right official resigned after Anonymous’ Paedophilia Claims.

If you want to have an idea of how fragile our data are inside the cyberspace, have a look at the timelines of the main Cyber Attacks in 2011 and 2012 (regularly updated), and follow @paulsparrows on Twitter for the latest updates.

END_OF_DOCUMENT_TOKEN_TO_BE_REPLACED 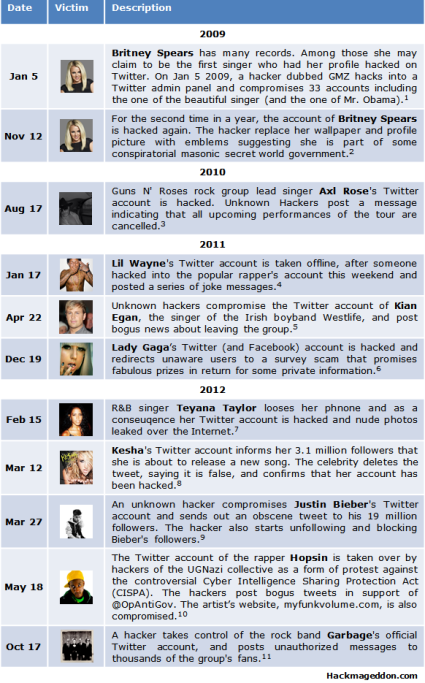 ber 2012 has deserved a bad surprise for the members of the famous rock band Garbage, who had their official Twitter account hacked from an unknown cybercrook who enjoyed posting bogus messages to their nearly 60k followers.

Unfortunately, among the music stars, they are not the only ones who have suffered this sad fate, and actually, since 2009 to present, the list is quite long.

Britney Spears opens this special chart, which also includes high-profile singers such as Lady Gaga, Justin Bieber and Kesha. Brit currently holds the unwelcome record to have been hacked twice, but the group of the victims is quite varied and covers different genres: pranksters and cybercrooks, at least from this point of view, have proven to be impartial.

The accounts have been hacked for different motivations: scam, hacktivism, or simple fun, and accessed via lost phones or by mean of brute-force or password-guessing techniques.

Famous singers are used to be on top of selling charts.I believe they willingly avoid to rank at the top of this unwelcome chart (after the jump you will find the related links).

If you want to have an idea of how fragile our data are inside the cyberspace, have a look at the timelines of the main Cyber Attacks in 2011 and 2012 (regularly updated), at the Cyber Attack Statistics, and follow @paulsparrows on Twitter for the latest updates.

END_OF_DOCUMENT_TOKEN_TO_BE_REPLACED

And here we are with our bi-weekly review of the main cyber attacks. This time is the turn of the first half of May.

Probably this month will be remembered for the huge cyber-heist against two Payment Processors, and affecting two banks (National Bank of Ras Al-Khaimah PSC in the United Arab Emirates and the Bank of Muscat in Oman), which suffered a massive loss of $45 million due to an endless wave of unlimited withdrawals from their ATMs.

Other relevant actions related to Cyber-criminal operations include the massive breaches against MSI Taiwan (50,000 records affected) and most of all, the Washington state Administrative Office of the Courts (up to 160,000 SSN and 1 million driver’s license numbers).

On the other hand, the hacktivists concentrated their efforts on the so-called OpUSA (7 May), even if it looks like that most of the attacks were nuisance-level. Instead, and this is a great news, after months of intense activity, the operation Ababil come to a stop.

On the cyber war front, this month reports an unedited conflict between Taiwan and Philippines.

Last but not least, even if this attack dates back to 2007, on the Cyber-Espionage front, Bloomberg has shaken this lazy month revealing the repeated attacks by the infamous Comment Crew hackers against Qinetiq, a very critical Defense contractor. The cyber threats from the Red Dragon (real or alleged) keep on scaring the western world.