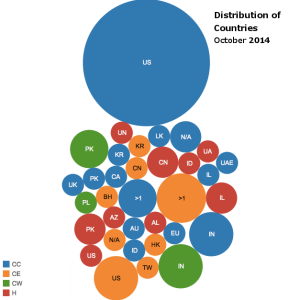 Here we are with the statistics extracted from the October cyber attacks timelines (part I and part II).

I have already stressed this concept many times, but some readers keep on asking where the data is scraped from. The answer is simple and always the same: I compile the timelines each month, quoting the sources in the footnotes. Each month I elaborate the data trying to represent them in charts, which of course cannot be exhaustive, but just give an idea of what’s going on in the cyberspace.

That said, this month I added again an old acquaintance: the graph related to the Country Distribution of attacks divided into categories: of course US rank of top, except for Cyber Espionage operations, which privilege multiple countries.

Instead, the Trend of Attacks chart shows an overall high level of activity throughout the month, with a prominent peak around the 9th, corresponding to the spree of attacks between India and Pakistan.

As usual Cyber Crime leads the Motivations Behind Attacks chart with nearly 60% (10 points below the previous month, but always at a remarkable level). Cyber Espionage jumps at number two with a new record (17.2%). Hacktivism ranks at number three with a “modest” 13.8%. You will notice also a small presence of attacks related to Cyber War (9.2%). I decided to classify in this group the events behind India and Pakistan and an alleged (unconfirmed) attack to the Warsaw Stock Exchange, for which an hacker affiliated to IS claimed responsibility.

And for the first time after so many months, SQL Injection leads the Attack Techniques chart with 18.4%. Particularly important is also the 13.8% of targeted attacks, which steadily places this category at the third place. On the opposite site, the number of DDoS attacks is constantly decreasing, and this explains its “miserable” 3.4%. I do not remember such a low level for this category. 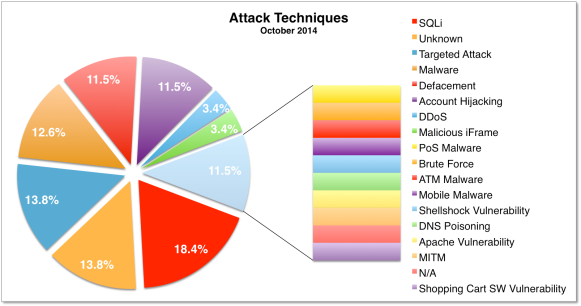 Again, for the second month in a row, industry ranks on top of the Distribution of Targets Chart (28.7%), nearly 7 points ahead of governmental targets (21.8%). Attacks against single individuals are the new entry at number three (10.3%), slightly ahead of organizations (9.2%).

A deeper look at the distribution of the industrial targets, shows a predominance of E-Commerce (24%), while, as it often happens, political parties lead the chart of the Organizations. 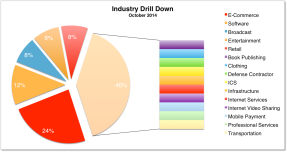 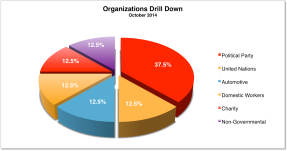 As usual, the sample must be taken very carefully since it refers only to discovered attacks included in my timelines. The sample does not pretend to be exhaustive but only aims to provide an high level overview of the “cyber landscape”, or at least of the ones that gained space in the media (yes, using an abused expression this is just the tip of the Iceberg).

Of course follow @paulsparrows on Twitter for the latest updates, and feel free to submit remarkable incidents that in your opinion deserve to be included in the timelines (and charts).