As usual let us begin with the Daily Trend of Attacks chart. The chart shows a clear peak on September, 27th, due to a wave of attacks of the Anonymous against the Cambodian Government. In general, the number of attacks reported on the news had an increase in the second part of the month.

No surprisingly, US lead the Country Distribution chart. Also, it is worth to mention the second place of Cambodia, as a direct consequence of the wave of attacks carried on by the Anonymous collective. India is in the middle of a Cyber War against Pakistan and this explains his bronze medal just ahead of UK. 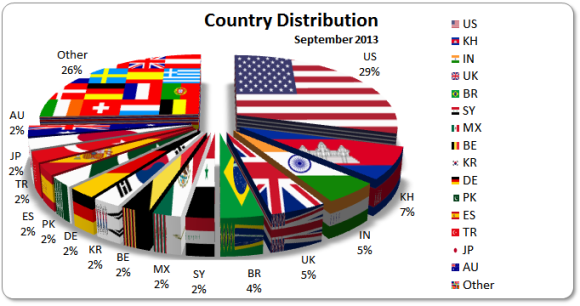 The Motivations Behind Attacks chart shows an unexpected overtake of Hacktivism on Cyber Crime. It’s also worth to mention the unusual level of attacks motivated by Cyber Espionage, jumped to a noticeable 10%: better countermeasures that allow to discover a growing number of sophisticated cyber attacks or a consequence of the marketing hype? In any case September has been particularly hard for Oil and Energy Sector that suffered several targeted campaigns.

The Distribution of Attack Techniques chart is completely unedited. Looks like hacktivists are shifting their preferences to other “unconventional weapons” such as Defacements and Account Hijackings. Maybe these techniques grant more visibility and less risks for the authors. Surprisingly for this month DDoS has fallen to 9% from 17.8% of the previous month. On the other hand targeted attacks are stable at 4%. 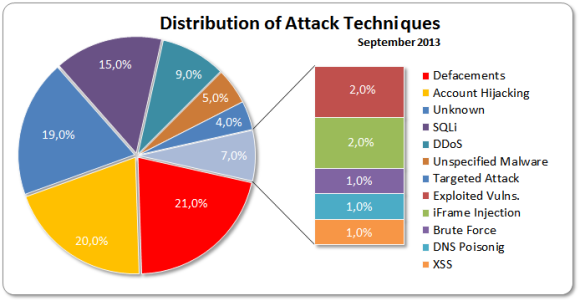 The Distribution of Targets chart confirms governments at number one, just ahead targets belonging to industry. Targets belong to Law Enforcements gained several positions in comparison with the previous month, raising at number three with 6%. Drilling down to industry fragmentation, financial services and E-Commerce lead the chart. 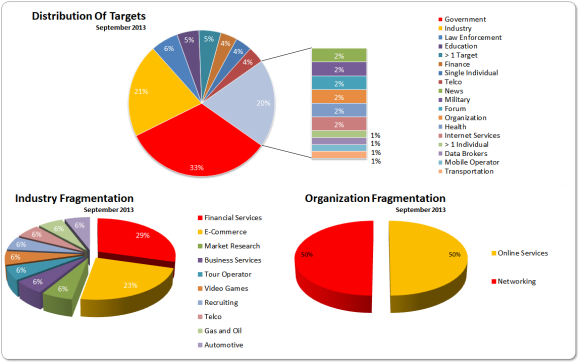 As usual, please bear in mind that the sample must be taken very carefully since it refers only to discovered attacks, published in the news, and included in my timelines. The sample cannot be exhaustive but only aims to provide an high level overview of the “cyber landscape”.