It’s time for a drill down to the Cyber Attacks Statistics for the month of May 2013. As many readers ask, the data for the stats is derived from the corresponding Cyber Attacks Timeline.

The Daily Trend of Attacks chart shows a month double-faced. After an initial peak, the first two weeks have shown a quite low activity. The second half of the month instead has shown a revamping of the activity.

The Motivations Behind Attacks chart is maybe the most interesting thing for this month: Cyber Crime has overtaken Hacktivism at the top of the chart, but most of all, the chronicles of this month have shed light on many noticeable attacks motivated by Cyber Espionage (most of all the infiltration against Qinetiq and the compromising of most sensitive U.S. advanced weapons systems). The Cyber War between Taiwan and Philippines also influenced the chart.

The Distribution of Attack Techniques assigns to the SQL injection the crown of the most used weapon for the month of May. DDoS is “only” at the third place with the half of occurrences. It is interesting to notice the high rate of attacks made by mean of account hijacking, at number four with the 12% of occurrences. a clear consequence of the long trail of high-profile attacks perpetrated by the Syrian Electronic Army. 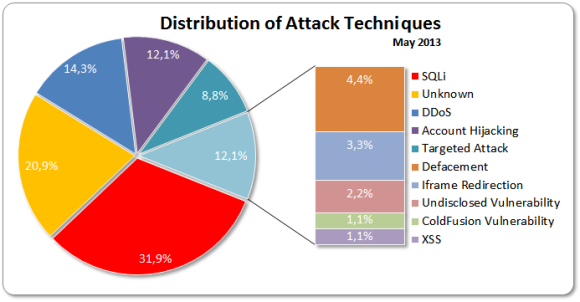 In comparison with the previous months, the Distribution of Attacks Chart “misses” the influence of the DDoS attacks against the U.S. Banks. Industrial targets lead the chart, followed at close distance by Governmental targets. Victims belonging to Organizations rank at number three at a greater distance.

As usual, please bear in mind that the sample must be taken very carefully since it refers only to discovered attacks included in my timelines. The sample does not pretend to be exhaustive but only aims to provide an high level overview of the “cyber landscape”.