Quick Update: More and more visitors ask where the data for the statistics is collected from. It is indicated at the end of each post, but for those that do not feel like to read until the bottom: the stats are an aggregation of the corresponding Cyber Attack Timeline of the current month.

Although the number of Cyber Attacks in February has not reached the level of January, the level of attention in this part of the year remains high.

The Daily Trend of Attacks chart clearly shows a peak around the 23th of February, the International Privacy Day, when the Anonymous unleashed their OpBigBrother, concentrating the fire against industries related to Video Surveillance and several Law Enforcement Institutions. Other “trafficked” day of the month were the 3rd and the 15th.

The Motivations Behind Attacks chart confirms the prevalence of hacktivism with 56% of occurrences, exactly the same percentage observed in January. Cyber Crime is stable at number two, even if its percentage dropped from 40% to 31%. It is interesting to notice, month after month, the growing number of Cyber Espionage campaigns discovered. 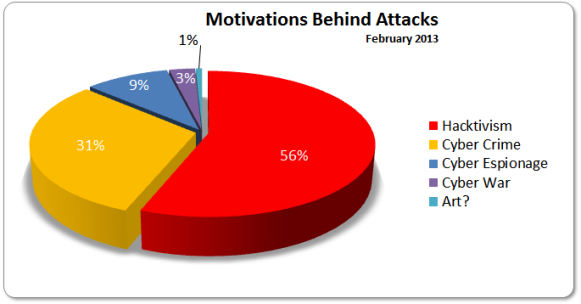 SQLi leads the Distribution Of Attack Techniques chart with 34.3% of occurrences, a value similar to the one encountered in January (32.6%) when this category of attacks ranked at number two. One month ago, the first place was for DDoS, which apparently is loosing appeal in February, dropping from the first to the fifth place with a small 8%, far from the 39% of the previous month and also overtaken, by Targeted Attacks (11.7%). The next months will tell us if this is the beginning of a new trend or simply an isolated sporadic event.

Last but not least,industry targets lead the Distribution Of Targets charts. This is a consequence of the spree of attacks against video surveillance industries happened on February the 23rd. Governmental targets confirm their second place with a value (23.7%) close to the one registered during the previous month. Targets belonging to organizations rank at the third place, in front of financial targets. 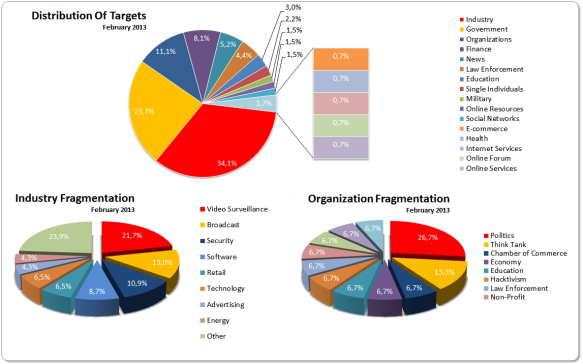 As usual, no need to remind that the sample must be taken very carefully since it refers only to discovered attacks included in the 1-15 and 16-28 February 2013 Cyber Attacks Timelines (the so-called tip of the iceberg), and hence it does not pretend to be exhaustive but only aims to provide an high level overview of the “cyber landscape”.