Here are the statistics for the Cyber Attacks occurred in the first half of January 2013 and included inside the corresponding Cyber Attack Timeline.

The Daily Trend of January shows a couple of peaks in correspondence of the 3rd and the 10th of January, during the DDoS attacks of the Izz ad-Din al-Qassam Cyber Fighters (another minor peak occurred during the 8th of January. On average the sample included 4.67 attacks per day.

Even the attack by the Islamist collective contributed to the overtake of the hacktivism against cyber crime shown in the Motivations Behind Attacks chart. One attack on two of the sample was done for this purpose, even if the authors with different connotations: from the protests against the infamous video “The Innocence of Muslims”, to the retaliation for the suicide of Aaron Swartz, going through the different operations carried on by the Anonymous. 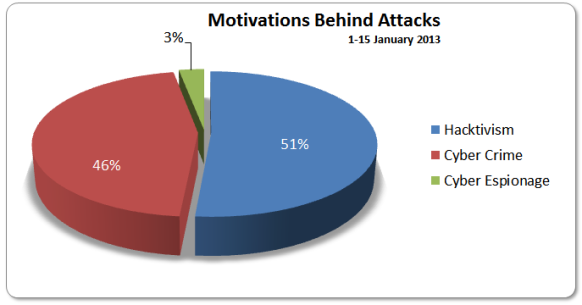 In any case, the Distribution of Attack Techniques chart shows frequency of DDoS Attacks did not prevent the SQL Injection of being the preferred weapon for cybercrooks with the 35% of occurrences. DDoS is immediately behind with the 27% of occurrences.

However, the Distribution Of Targets chart shows that targets belonging to finance were the most preferred in this period with the 25% of preferences, certainly a consequence of the wave of DDoS attacks against US Banks. Governmental targets are very close with the 24% of occurrences. Industry targets complete the podium with the 13%, just before targets belonging to Organizations and Education, respectively with the 8% and 7%.

As usual, no need to remind that the sample must be taken very carefully since it refers only to discovered attacks included in the 1-15 January 2013 Cyber Attacks Timeline (the so-called tip of the iceberg), and hence it does not pretend to be exhaustive but only aims to provide an high level overview of the “cyber landscape”.

If you want to have an idea of how fragile our data are inside the cyberspace, have a look at the timelines of the main Cyber Attacks in 2011 and 2012 and the related statistics (regularly updated), and follow @paulsparrows on Twitter for the latest updates.

Also, feel free to submit remarkable incidents that in your opinion deserve to be included in the timelines (and charts). To do so, you can use this form.

Loading Comments...
Comment
×
We use cookies to ensure that we give you the best experience on our website. If you continue to use this site we will assume that you are happy with it.Ok