The period between November and December is particularly interesting for the Infosec community, since nearly all the main security vendors use to unveil their predictions for the next year, trying to anticipate the trends and the issues that will trouble the system administrators’ sleeps.

Exactly as I did last year, I analyzed the predictions of 7 vendors, choosing the ones that I consider particularly meaningful for the presence of the vendor in the market and for the coverage of their respective solution portfolio. In comparison with the last year, I was not able to find any prediction from Cisco (at least so far). However I was able to include the ones issued by Symantec, that were missing from my initial version. Hence the list of the vendors taken into consideration is the following:

Nearly all the analyzed vendors went through deep transformations during the past year, reflecting the changing trends in the market. Fortinet is considered a vendor focused on UTM Technologies, although it offers a wide portfolio of solutions ranging from endpoint to WAFs. After the acquisition of Astaro, Sophos is expanding its offering from the endpoints to the UTM segment. McAfee covers a wide area: historically focused on the endpoints, the long trail of acquisitions allows the company to be present in all the segments of the security market. Websense went through its historical flagship, the URL filtering, moving its security model to the endpoint. Symantec and Trend Micro have their foundation on the endpoints, but are more and more concentrated on securing the cloud. Kaspersky is still concentrated on the endpoints, although the company has been very active in the last year in the analysis of the cyberwar events, most of all in Middle East. 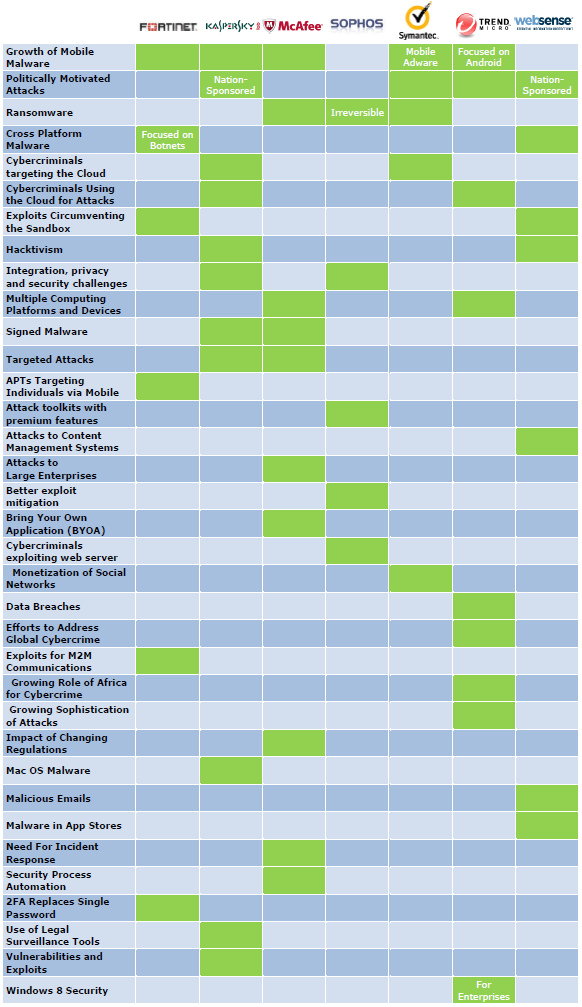 Yes, the rise of the malware on mobile platforms seems unstoppable, not only it reached unprecedented levels in 2012, but apparently it will be the protagonist even for 2013, at least for 5 vendors on 7. Indeed the vendors are 6 if one considers also the cross-platform malware which is equally a threat for mobile platforms. Furthermore one vendor (Fortinet), considers the role of mobile threats also as a threat vector for APTs in 2013.

It is also interesting to notice the ransomware at number 3 with just 3 preferences. Particularly interesting the indication of Sophos that speaks of “Irreversible” malware, since this class of threats is increasingly using encryption to make the compromised content unrecoverable.

The trend is even more visible from the distribution chart, that also emphasizes the role of the cloud, in the double shape of source and target of the cyber attacks. 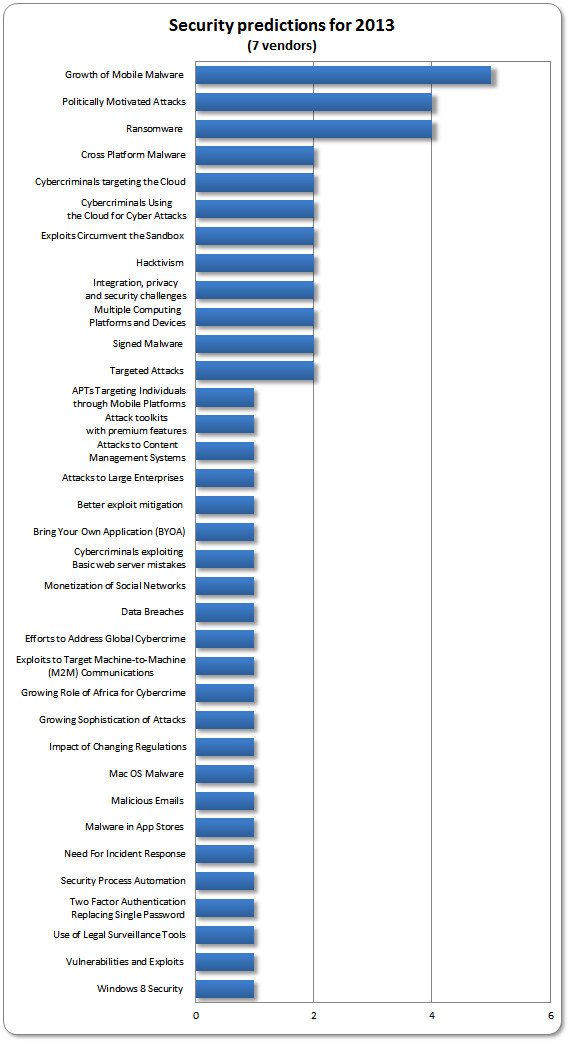 Two vendors (McAfee and Trend Micro) include the proliferation of embedded systems (for instance Smart TV equipped with Android) as one of the main security issues for 2013. Honestly speaking I would have expected a major impact for this threat.

Last but not least, two vendors (Kaspersky and McAfee) believe that Targeted Attacks and Signed Malware will experience a major rise in 2013.