Here’s the partial snapshot for the Cyber Landscape in October. I have deliberately decided not to include in the statistics the massive Cyber Attack against the Universities executed by Team Ghost Shell, since, in my opinion, it would not have been formally correct include into the sample, this wave of cyber attacks which have been distributed in several months, and disclosed all at once.

In any case, looking at the sample including all the other attacks collected in October, according to the Daily Trend they were mainly concentrated at the beginning of the month:

For what concerns the Motivations Behind Attacks chart, Cyber Crime ranks at number one, with nearly the 58%, approximately at the same level of September (when it was at 55%). Interesting to notice, for the first half of October, the rise of events related to Cyber Warfare, mainly related to what is happening in the Middle East, and in particular in Iran, that suffered a couple of noticeable cyber attacks. In this landscape, the events related to hacktivism appear in decrease with the 35% of the events. 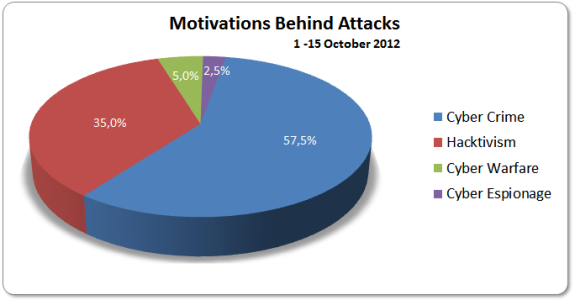 Even if the events related to hacktivism seem to be decreasing, the Distribution Of Attack Techniques shows a revamp of DDoS (the favourite weapon of hacktivists), mainly due to the wave of DDoS Cyber Attacks against the U.S. banks. Even if approximately one-fourth of the attacks has an unknown origin, SQL is stable at rank number three with the 22.5% of occurrences. It also worth to mention the 5% gained by Targeted Attacks.

Last but not least, the Distribution Of Targets chart, that confirms the weakness of the targets belonging to Government, ranking at number one with nearly one-third of the occurrences. It does not matter if the reason is hacktivism or cyber crime, Governments keep on to be the preferred victims of cybercrooks, at least for this first half of October.

Again, I will never get tired of repeating that data must be taken very carefully since they do refer only to discovered attacks (the so-called tip of the iceberg), and hence do not pretend to be exhaustive but only aim to provide an high level overview of the “cyber landscape” of the considered period.

In any case, if you want to have an idea of how fragile our data are inside the cyberspace, have a look at the timelines of the main Cyber Attacks in 2011 and 2012 (regularly updated), at the Cyber Attack Statistics, and follow @paulsparrows on Twitter for the latest updates.