It’s time for the statistics derived from the Cyber Attacks Timeline of September 2012 (Part I and Part II).

I have decided to add another chart reporting the Daily Trend for the Cyber Attacks. According to collected data, the first week of the month has shown the higher concentration of events. 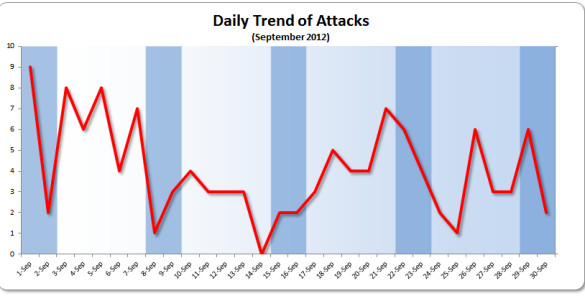 The Motivations Behind Attacks chart reveals the predominance of Cyber Crime which ranked, in September, at number one with the 55% of occurrences, followed by Cyber Crime, at number two with the 42% of occurrences. This is in contrast with the result of the previous month, in which the ranks were pratically inversed (respectively 58% Hacktivism and 36% Cyber Crime). 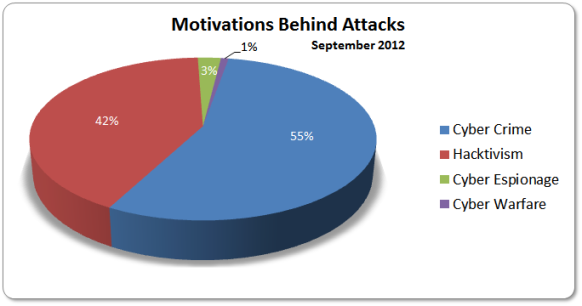 The Distribution Of Attack Techniques Chart confirms the predominance of SQL Injection over Distributed Denial Of Service. Interesting to notice the position of Targeted Attacks at the fifth place with the 5% of occurrences (I wonder how many will go undetected). Of course the main purpose of Targeted Attacks is to remain undetected for long time. Is the fact that they appear in the chart a sign of increasing detection capabilities by technological and human countermeasures? 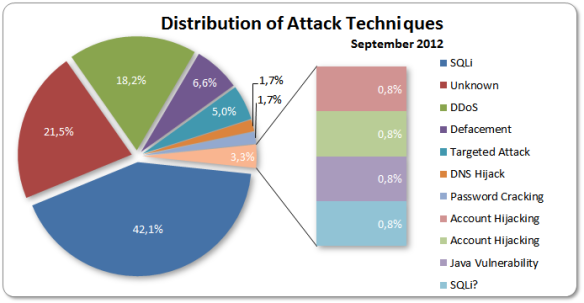 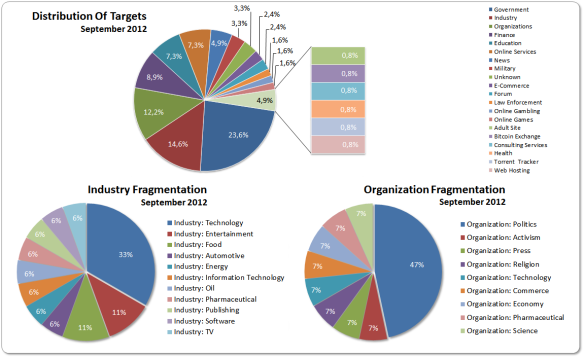 Again, I will never get tired of repeating that data must be taken very carefully since they do refer only to discovered attacks (the so-called tip of the iceberg), and hence do not pretend to be exhaustive but only aim to provide an high level overview of the “cyber landscape” of the considered period.

In any case, if you want to have an idea of how fragile our data are inside the cyberspace, have a look at the timelines of the main Cyber Attacks in 2011 and 2012 (regularly updated), at the Cyber Attack Statistics, and follow @paulsparrows on Twitter for the latest updates.