Here we are with the statistics from the Cyber Attack Timelines  for the first and the second half of July 2012. The sample included 76 attacks which have been analyzed according the three familiar parameters: Motivations behind attacks, Distribution of attacks techniques and Distribution of targets.

Again, I will never get tired of repeating that data must be taken very carefully since they do refer only to discovered attacks (the so-called tip of the iceberg), and hence do not pretend to be exhaustive but only aim to provide an high level overview of the “cyber landscape” of the considered period. Moreover, remember that the most dangerous threats are the invisible ones.

As far as  the Motivations Behind Attacks are concerned, July has confirmed the predominance of Cyber Crime, although it dropped down to 55% from 72% of the previous month. It is interesting to notice the corresponding growth of Hacktivism, from 18% in June to 32% in July. Although the number of (discovered) attacks motivated by Cyber Espionage is always low, this month their occurrences nearly doubled as a consequence of the events in the Middle East, that confirms to be a “hot area” for the Cyber Arena. Cyber Warfare is positioned at the bottom of the chart with a “poor” 4% of the occurrences. 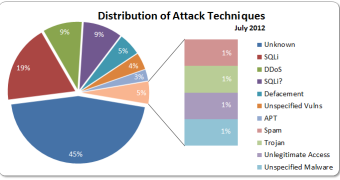 The Distribution Of Attacks Techniques chart confirms that is getting harder and harder to recognize what the cyber crooks have leveraged to reach their goal. The percentage of the unknown attacks has grown from the 36% of June to the 45% of July. In any case, among the recognized attacks, SQL Injection ranks at number one with the 28% of possible occurrences. DDoS has confirmed his decreasing trend from 16% in June to 9% in July. Maybe the possible victims are learning to effectively defend themselves?

The Distribution of Targets chart confirms that targets belonging to industry are always on top of the preferences of Cyber Crooks with the 32% of occurrences, well above the 21% of the last month. Government targets confirmed their second place with the 15% of occurrences (were the 18% on July) followed by Online Services with the 10%. It is interesting to notice the low occurrences of incidents targeting Law Enforcement Agencies and Military Institutions. Maybe after the high number of cyber attacks suffered, they are learning to enforce adequate countermeasures.

If you want to have an idea of how fragile our data are inside the cyberspace, have a look at the timelines of the main Cyber Attacks in 2011 and 2012 (regularly updated), and follow @paulsparrows on Twitter for the latest updates.