Approximately a couple of weeks ago, an Israeli hacker called [email protected], one of the early contenders of the Middle East Cyber War, had defaced the Iran Energy Water Website. The attack was claimed as a form of cyber protest (and cyber retaliation) against Iranian institutions executed by the same author.

Yesterday, two weeks later, with the same motivations, the same hacker has targeted and defaced 91 Iranian sites, including several government and education sites together with several important companies.

All the affected sites (at the time of writing the ones listed below are still defaced) show the same message against the “terror” and the nuclear strategy of Iran together with an Israeli flag. 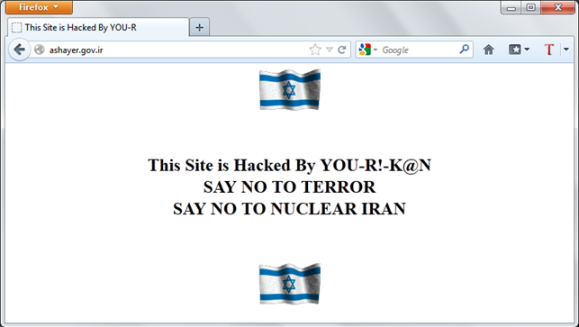 According to the author, the list of the victims include:

According to the original statement of [email protected]:

This is an attack against Iran than support terrorism and developing nuclear weapons to destroy Israel.

The situation between the two hot countries of the Middle East continues to be tense, and cyberspace is not an exception.

We use cookies to ensure that we give you the best experience on our website. If you continue to use this site we will assume that you are happy with it.Ok