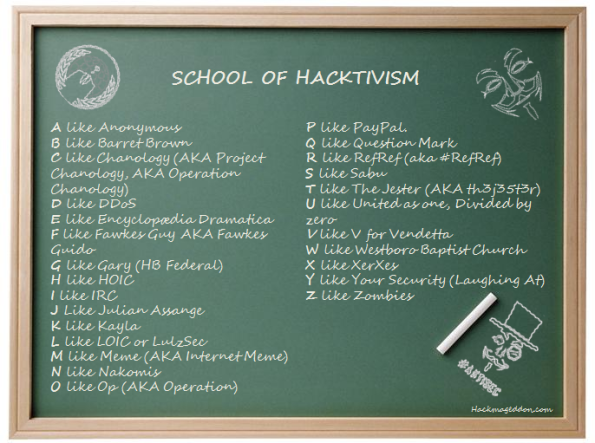 Considered one of the early members, Barrett Brown is the alleged spokesperson of Anonymous.

C like Chanology (AKA Project Chanology, AKA Operation Chanology)

A protest movement against the practices of the Church of Scientology by Anonymous. The project (or Operation) was started in response to the Church of Scientology’s attempts to remove material from a highly publicized interview with Scientologist Tom Cruise from the Internet in January 2008 and was followed by DDoS attacks and other actions such as black faxes and prunk calls.

Distributed Denial of Service (abbreviated DDoS) is the preferred weapon by Hackitivsts, since it does not need particular hacking skills and may also be centrally controlled (with a hive mind who define the target). The preferred tool for perpetrating DDoS attacks is LOIC, although next-gen tools are under development.

A satirical open wiki, launched on December 10, 2004 and defunct on April 14 2011. It is considered one of the sources of inspiration for The Anonymous.[1]

Guy Fawkes (13 April 1570 – 31 January 1606), also known as Guido Fawkes, belonged to a group of provincial English Catholics who planned the failed Gunpowder Plot, a failed assassination attempt against King James I of England. His stylised mask designed by illustrator David Lloyd and used as a major plot element in the “V for Vendetta“ Comic Book, is the symbol for the Anonymous. The failure of the Gunpowder plot has been commemorated in England since 5 November 1605.

The company whose CEO was Aaron Barr. In 2011 he claimed to have exploited social media to infiltrate and gather information about The Anonymous. In retaliation the Anonymous defaced the HBGary website, copied tens of thousands of documents from both HBGary Federal and HBGary, Inc., and posted tens of thousands of both companies’ emails online. Anonymous became an obsession for Aaron Barr, who, in early 2012 has been fired by his most recent employer, Sayers and Associates, for “spending too much time” in continuing his obsessive pursuit of Anonymous.[2] Recently (February 27 2012) it has been acquired by ManTech International Corporation, another victim of Anonymous.[3]

Internet Relay Channel is the protocol generally used by hacktivists for real-time chat or conferencing since it grants anonymity,

The editor in chief and founder of WikiLeaks, the media website publishing information from whistleblowers. In December 2010 the decision by PayPal, Visa and MasterCard to halt donations to WikiLeaks unleashed the reaction by the Anonymous who “DDoSed” the sites and gained, for the first time huge attention by the media.

This letter deserves two mentions. LOIC is DDoS tool used by the Hacktivists to perform their protest attacks. LulzSec is the infamous hacking collective which gained huge attention by media between April and June 2011 in their infamous 50 days of Lulz in which they hacked, among the other victims, Sony, PBS, SOCA, Nintendo and many other before deciding to retire on Jun 26 2011. Their association with the Anonymous formed the so called Antisec Movement.[4]

The term meme, a shortening of the term mimeme from Ancient Greek, is used to describe a concept that spreads via the Internet. Anonymous (used as a mass noun) is an Internet meme that originated in 2003 on the image forum 4chan, representing the concept of many online and offline community users simultaneously existing as an anarchic, digitized global brain.

Another alleged member of the LulzSec collective.

Want you take down something or someone? There’s an #Op for that! The term #Op, followed by the name of the target is used to specify an Operation (read attack) against a specific target. For instance  #OpItaly indicates the wave of DDoS attacks against Italian websites belonging to government or other institutions. Actually the same letter could be used for Occupy which indicates the wave of movements of protests encouraged all over the world by the OccupyWallStreet (OWS) movement started on September, 17 2011.

The Anonymous deserved the first pages of the newspapers all over the world in December 2010 when they took down MasterCard, Visa and PayPal websites after their decision to halt donations to WikiLeaks.

The Question Mark occupies the position of the head on the yet famous anonymous logo. The imagery of the “suit without a head” represents leaderless organization and anonymity

RefRef (or #RefRef) is the next-gen DDoS tool after LOIC. It is a simple but powerful 51-lines Perl script, which uses the BENCHMARK() function to carry on a SQL Injection attack and cause a denial of service on the target (provided it has a vulnerable DB);

Sabu is the legendary alleged leader of the LulzSec Group according to some leaked IRC chats.[5] According to The Jester (see the correspondig letter), a white-hat who declared war to LulzSec and tried to expose them, the real identity of Sabu is Hugo Carvalho, an IT consultant from Portugal.[6]

A greyhat hacktivist claiming to act as an american patriot. A former soldier, he was responsible of several DDoS Attacks against Wikileaks and the LulZsec collective. He claimed to have exposed Sabu, the LulzSec’s alleged leader. To perform his attacks he devolped a home-made DDoS tools called XerXes.

One of the most famous mottos (or memes) of Anonymous

A ten-issue comic book series written by Alan Moore and illustrated mostly by David Lloyd, set in a future United Kingdom imagined from the 1980s to about the 1990s in which a mysterious masked revolutionary who calls himself “V” works to destroy the totalitarian government. “V” an anarchist revolutionary dresses the Guy Fawkes mask. The same mask which is universally recognized as the symbol of The Anonymous.

An Independent Baptist church known for its extreme stance against homosexuality and its protest activities. On February 24, 2011 it was took down by a DDoS attack, which the church claimed to have been performed by the Anonymous. The latters denied responsibility, instead identifying The Jester as the Culprit.

The DDos Tool developed by The Jester (see the corresponding letter).

Laughing At Your Security (since 2011) was the motto of LulzSec (see the corresponding letter).

Machines used for DDoS Attacks. The LulzSec claimed to own a personal Botnet made of zombies used to perform their legendary DDoS Attacks to SOCA, etc.

2 thoughts on “School of Hacktivism”