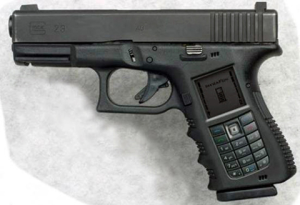 Or rather “Tweets like Bullets”… I must confess I was uncertain about the title of this post. At the end the one I chose, although absurd at first view, better describes the role that Mobile Technologies (the so called Mobile Warfare) are playing in the dramatic events of Syria. Only few months ago it would have been absurd to only think to fight a tank with a mobile phone, today, looking at what it is happening in the Middle East (and also to what has happened in the Maghreb), it is an image which goes far beyond the reality, and perfectly describes in few words, much better than any post, the way in which the battles for human rights are being led in the Web 2.0 (or War 2.0) world…

The title of the post came to my mind after viewing this post, which well summarizes the way revolutions are being fought.

And both of them (together with other tweets of the same shape appeared today), are dramatically witnessing, once again more than any post, how deeply the Mobile Warfare is acting in Syria.

Mobile Warfare shows, once more, that modern wars are being fought in real battlefields and virtual battlefields in the same time, and if one considers mobile phones as a new kind of weapons (and social networks as the media to propagate PsyOps), one finds for these new weapons the same patterns used for real weapons. As a matter of fact what happens in real battlefields? It often happens that foreign governments interested in changing the tide of the battle, allocate funding  for the revolutions. Instead in virtual battlefields foreign governments spend millions to facilitate the use of the Internet technologies for activists (as I reported yesterday). Moreover in real battlefields close countries to war zones are used to deliver weapons to one of the parties fighting; again in virtual battlefield close countries are used to smuggle “war 2.0” weapons such as satellite phones, cameras and laptops. Not only: while in real battlefields corps of engineers build line of communications, in virtual battlefield corps of (network and security) engineers  build line of mobile communications: this happened in Libya with the backing of Egypt and this is happening in Syria with the backing of Jordan which today enhanced the strength of its mobile network to balance the cut-off of yesterday performed by the Government in order to prevent Mobile Communications the Deraa Governatorate.

In the virtual battlefield there are also sabotage actions: how else to interpret the fact that the Syrian government has been forced to postpone the auction of its third GSM mobile licence due to the political uprisings in the country. The story in itself is really interesting, but there is a point in particular which is worthwhile to mention:

Before the protests started, France Telecom, Turkcell and Etisalat were all in the running to bid for the licence. But, at the end of March Etisalat withdrew its offer with France Telecom and Turkcell both removing their bids at the beginning of April.

Etisalat is the UAE Telco Provider which took part to the hack of Colonel Gaddafi’s Libyana Operator  providing the satellite feed allowing the Free Libyana calls to be routed. Mobile Warfare has always the same patterns regardless of the country in which it acts.

One last consideration: on top of these thoughts (and these tweets) I could not help thinking about the opposite role that mobile technologies and social network play into different regions of the world. While they contribute to maintain stability (and maturity) in mature countries (even if an excessive usage, most of all from younger generations, tends to make people slave and immature), they are playing a crucial role to enhance the level of freedom and awareness in unstable countries. This is what I called The Thin Red Line which marks the political and social impact of the new technologies into our World constantly moving.