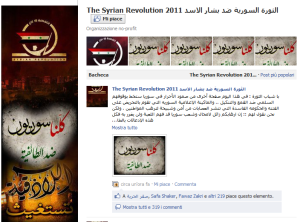 Sources report that last week 150 people were killed during the protests against president Bashar al-Assad in Syria. Also in this circumstance, as already happened in Tunisia, Egypt and Libya, the world is witnessing to the protests thanks to the hundreds of citizen reporters equipped with their mobile devices and Internet connections.

The mobile warfare is acting in these countries too: as a matter of fact the tweets allow to follow the protests in real time, by mean of continuously up-to-date short messages, while Facebook allows the spread of the movements throughout the Nation (and not only): the blue social networks calls to join the revolution, by mean of continuously increasing groups, the largest of which The Syrian Revolution 2011, currently counts more than 90.000 supporters. In the same time, more and more videos shot by mobile devices are flooding YouTube.

In a certain sense it looks like the Middle East is playing a global Risk board game, whose troops are represented by mobile devices, whose effects on the social landscape effects on the social landscape have no geographical boundaries, especially for those governments that restrict the civil liberties of their citizens. This global Risk match is far from the end, since the invasion of the Mobile Warfare (and its effects for the governments)  is also happening in Yemen and Bahrain, which are suffering similar outbreaks of protests. It is interesting to notice that all the peaks of the revolutions were spaced, in a time scale, by approximately one month:

If we perform a kind of extrapolation, does this mean that peaks of the protest in Syria and Jordan will reach the maximum at the half of April? 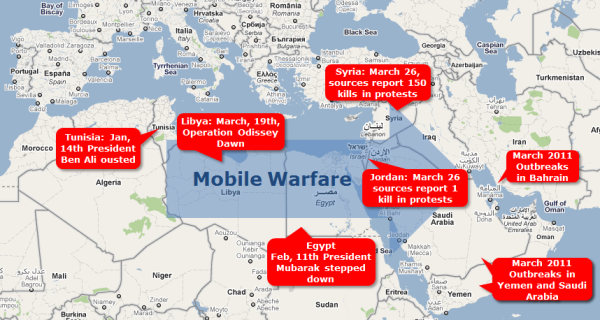 Speculation aside, as far as Syria is concerned, what is happening is following the same pattern advised in Maghreb area with the only difference that, so far, Syria did not decide to disrupt the internet connection in order to stop the stream of information towards foreign countries.

From a political and social perspective, all the involved countries have too many aspects in common: long-living governments (in Syria the al-Assad Dynasty governed continuously for 40 years, which become 42 in case of the monarchy of Bahrain), younger generations with no dream and trust on future, eager for more freedom. Most of all, younger generations which have access to internet connections and social networks (I was in Syria for work three years ago and can confirm that, even then, the penetration of internet, mobile technologies and social network was well established), through which they may observe, study (and compare), the (apparently) better conditions of their occidental peers.

I think the process is irreversible, and indeed is likely to increase (Saudi Arabia, Iran and Iraq will probably be suffering other outbreaks in the middle term). Meanwhile will be interesting to notice if the involved governments will apply preventive measures, on large scale, for instance the disruption of the Internet connections, or targeted specifically on mobile devices or preventing to reach the social networks for sharing tweets, groups or videos…

8 thoughts on “Mobile Warfare in Syria”